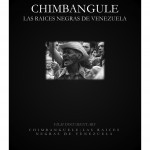 “Golpe Negro” the second part of the film documentary series of (In)Tangible Traces, deals with the traditions of the Negro community of Venezuela, specially with the Chimbanguele. Brought to the Estate of Zulia in the 15th and 16th century as units of commerce, slaves kept their previous rituals and traditions from the Ewe Fon people of Benin.

“Golpe Negro” focuses on the movements, sounds and story telling that have survived through years of fight for freedom and a re-affirmed identity. Drums, saints, movements and their stories will be presented in counterpoint to a reality of economics, political discussions and dialects of identity on a Venezuela that keeps trying to be renewed.